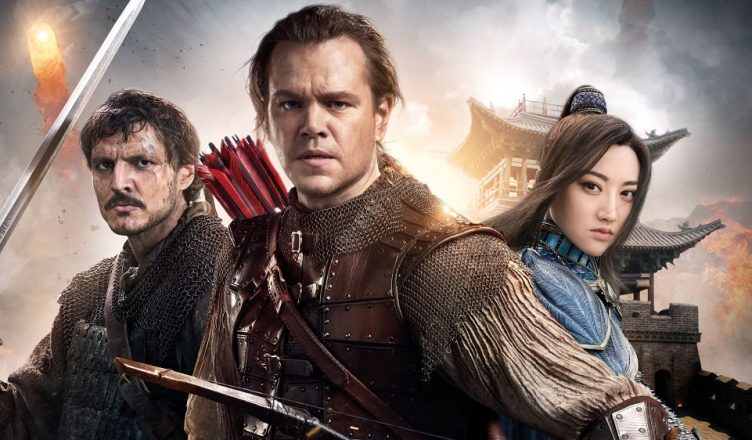 I think I must have been living in the cafe the past few months, since I did not hear a word of Zhang Yi Mou’s latest film ‘The Great Wall’. When I heard the movie title and heard the lead cast was Matt Damon and Andy Lau, I thought  to myself ‘here’s another war story of the English taking over China’. My assumption was totally blown away when I saw the movie trailer. It’s a simple movie plot with a lot of war scenes that’ll prove to be supremely entertaining. The movie opens with William (Matt Damon) and his buddy Tovar (Pedro Pascal) scouring China for black powder to gain richness and wealth. However, they were attacked by a beast and managed to kill it.  William was curious to find out what he killed thus decided to carry the severed beast’s arm with him. On their way, there were ambushed by local mercenary and was force to find sanctuary at The Great Wall which unbeknown to them will be going to the BIGGEST WAR TO PROTECT MANKIND!

The plot thickens when the general and his commanders find the severed beast’s arm. They began to question ‘how and where did William & Tovar’ killed the beast. Then suddenly, war drums are sounded for The Great Wall is under siege.  Both of them are still unaware of what’s going on thinking the battalion is going to war with another country. To their shock, they’re actually fighting against the beast that they killed earlier.

After the attack ended, it was finally revealed to Willian & Tovar that the beast that they saw is know as Tao Tie as explained by army strategist Wong (Andy Lau speaking in English native is definitively a first for me 😛 ). Every 60 years, Tao Tie will awaken to hunt food for their queen. They’re nasty flesh eating monster and are gluttonous by nature. The Great Wall was build to stopped the Tao Tie from entering the Forbidden City where more than 2 million people resides. Should the queen feed on all the human, she’s able to breed more Tao Tie to take over the entire world.

This is the secret of The Great Wall and those who survived the attack are never allow to leave the place. Here they meet fellow companion Ballard (Willem Dafoe) who’s been trapped in The Great Wall for more than 25 years and looking for an opportunity to get out. In the battle with Tao Tie, army strategist Wong realised that magnet is able to control the Tao Tie enough for a soldier to kill it. Saying that, William decides to help them by teaching them ways to fight and capture a live Tao Tie for experiment. However, before they can catch a live Tao Tie, General Zhang was killed in an ambushed by the cunning beasts which led to Commander Lin being appointed as General of the battalion.

Experimenting the magnet with a live Tao Tie proves to be fruitful and they begin to device ways to kill the queen. Here you might think the story will slow down but nope you’re in for another surprise. The cunning beasts has managed to dug a hole thru The Great Wall and has entered to attack the Forbidden City. With no other option, the battalion race to enter the city to fight valiantly against the beasts.  After many sacrifices and attack against the queen the battle was won. Here you must be prepared for heart stopping moments and exciting fighting scenes. Here’s my Top 5 reasons why you should watch The Great Wall:

Highly recommend you to catch The Great Wall over the long weekend break. It’s definitely a movie worth watching! Till then, keep you posted on my next movie review 😀