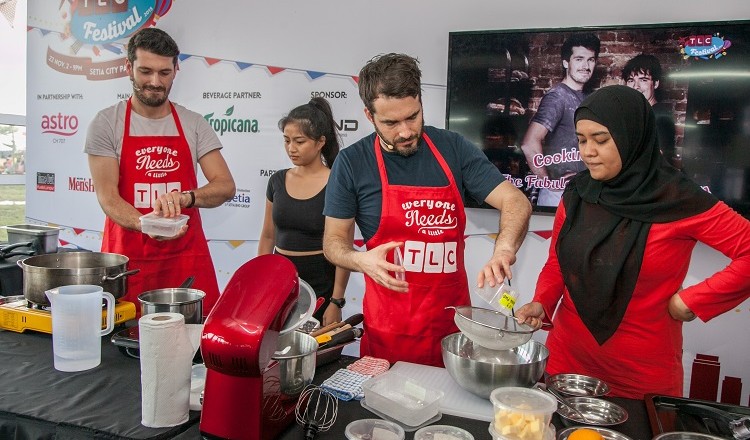 Last weekend, I headed for the first ever TLC Festival at Setia City Park, Setia Alam. Lady luck was on my side as the rain stopped right before the festival begin. Not only that, I also managed to grab a great parking lot nearby. The festival was crowded with people enjoying food and drinks, fun filled activities and performances. Some of the fun activities included workshops such as Mexican cooking and coffee appreciation, a holiday grooming session by Watsons Celebrity Friend Datin Winnie Loo, rock climbing and lots more.

I had my chance earlier meeting Tom and Henry Herbert of TLC series, The Fabulous Baker Brothers during Watsons event. Hopefully, I’m able to catch the rest of TLC personalities such as the ever bubbly Janet Hsieh, host of TLC’s Fun Taiwan franchise, Erwan Heussaff, TLC Southeast Asia’s all-new brand ambassador  featured in Food Fix with Erwan Heussaff and last but not least Jojo Struys, host of TLC’s Jojo’s Diary of Asia.

On the stage, Janet Hsieh shared her travel adventures, relationship advice and her latest series Fun Taiwan All-Stars: Wedding Special which captures some magical moments of her recent big day in Antarctica. While Tom and Henry Herbert (The Fabulous Baker Brothers) shared the stage with lucky fans to cook some Malaysian favourites – ‘Nasi Goreng with Smoked Mackerel’ and ‘Chicken Satay Kebabs’.

Followed by Erwan Heussaff showing us how he makes ‘Soft Shell Crab Orange Passembur’, a dish inspired by one of his favourite Malaysian eats. Not to be missed was the tap dance performance by Jojo Struys, featuring ethnic Indian, Chinese and Dayak percussions. Apart from the TLC stage segment, we were also entertained by dance performances by the Rejuvenate Dance Crew and Watsons Move Your Body Zumba session. Too bad, the hot air balloon activity had to be cancelled as it was too windy.

The TLC Festival Malaysia is in partnership with Astro, main sponsor Watsons Malaysia, and with the support of beverage partner Tropicana and sponsor Khind. Hopefully, next year they will hold it again and this time the weather will stay sunny throughout the entire day!