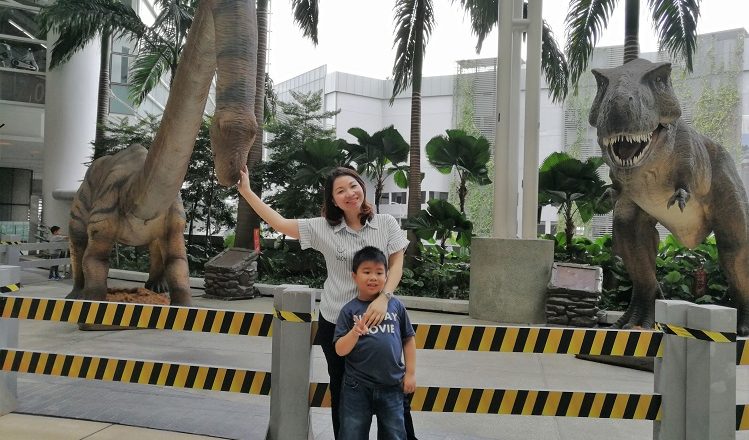 Schools holidays are here! Are you in a panic mode looking for a place to go with your kids? Fret not, as there are tons of kid’s activities happening in town. If your kids are fans of Dinosaurs, then you should head to Paradigm Mall, Petaling Jaya and catch Dinosaurs Alive! 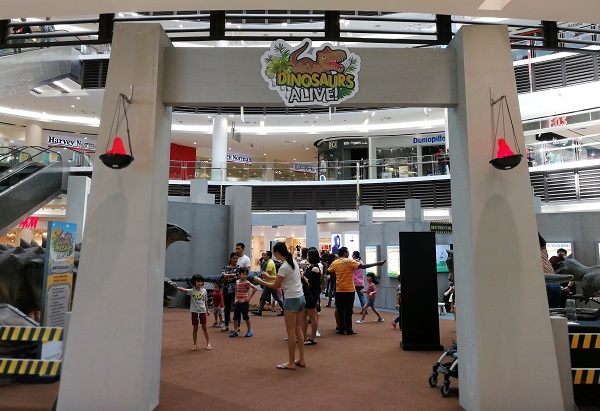 As both of my boys are fans of these prehistoric animals, they were excited to check out Dinosaurs Alive show. Happening from 22nd March – 7th April, be prepared to be awed by seven live-sized animatronic dinosaurs including iconic species such as Tyrannosaurus (T-Rex) and Memenchisaurus located at the Boulevard in level G, as well as Ankylosaurus, Velociraptor, Parasaurolophus and non-animatronic dinosaurs such as Parasaurolophus and Protoceratop located at Upper Atrium in level UG. 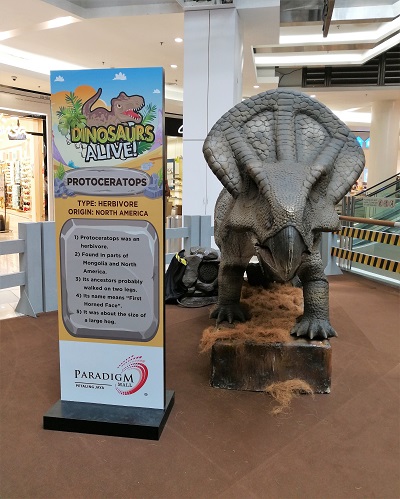 There are tons of Dinoclub activities and children workshops held. Kids will get to engaged and learn more about the prehistoric reptiles while cultivating their inner creativity. Are you curious to find out what kind of activities are available? Then, continue to read on…. 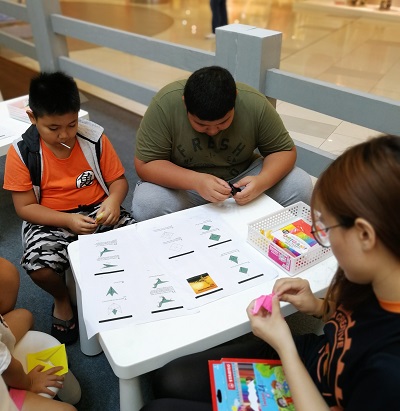 The first thing that caught the boy’s eyes was the origami workshop. Here they were taught to fold an origami of a dinosaur, step by step using the pictorial given. Take note that this workshop can only accommodate a maximum of 24 person. 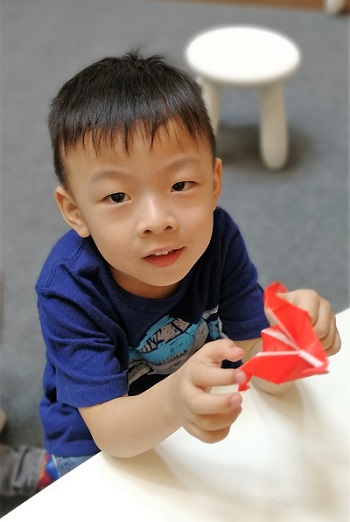 Take a look at the satisfying expression on Kenson’s face when he completed his origami. 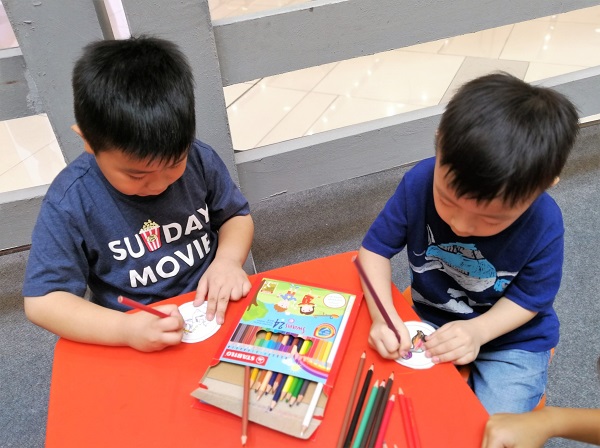 Let the kids unleash their creativity and imagination in this colouring corner. After choosing their favourite Dinosaur picture and completed their coloring, they can turn it into button badges. 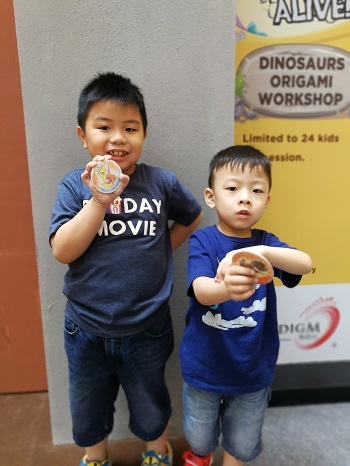 What do you think of their work? LOLX 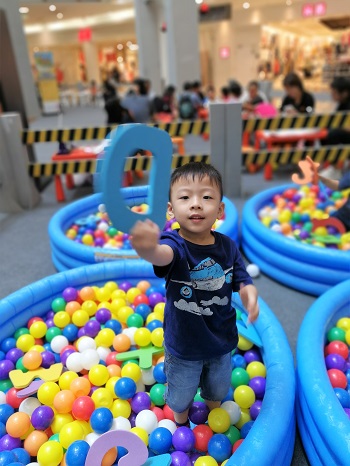 Raise your hands up if you love a good treasure hunt! My boys certainly did! All they had to do was find the word DINO in 10 minutes to win fantastic vouchers. They had so much scouring through the colourful balls. Did they make it in time? Yes, they did! 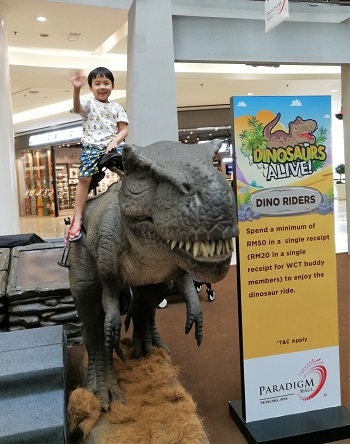 This is the only time you might be able to get a chance to ride on a prehistoric reptile especially the T-REX. There are two rides available namely the baby Spinosaurus and T-Rex dinosaur toy. 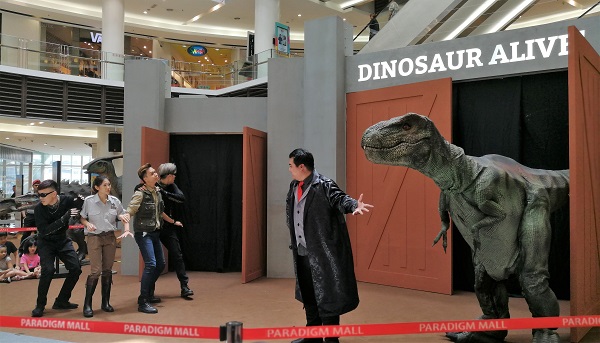 Together with my boys we managed to catch this 25-minute thrilling live performances with Triceratops, T-Rex and Velociraptor. It was a hilarious comical performance and got us rolling around in laughter. 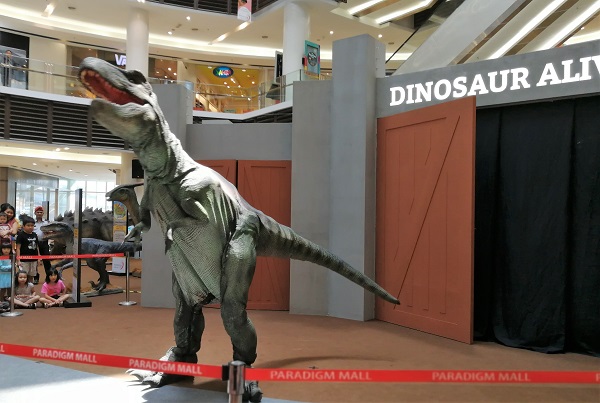 The live show is only available on weekends at 12pm, 3pm, 5.30pm & 8pm. Each performance has a different story hence might be a good idea to stay back for all of it. At the end of the performance, you can take a picture with the crew and Dinosaurs too!

Psst…. Shoppers in Johor Bahru are also in for a surprise! You will also be able to catch a glimpse of the prehistoric reptiles including a life-sized blue Velociraptor, as Paradigm Johor Bahru (Paradigm JB) brings Jurassic World to life from 20th March to 10th April 2019!

Enjoy the Parkson School Holiday Promotion while shopping at Paradigm JB; and also be entitled to a 20-minute FREE Wall Climbing session with just a minimum spend of RM80 (or RM50 for HSBC Credit Cardholders)*

On top of that, Jurassic World enthusiasts and collectors can redeem a FREE Jurassic World Tote Bag with a minimum spending of only RM280 (or RM200 for HSBC Credit Card Holders)* T&C applies.

There’s so much fun happening at Paradigm Malls, Petaling Jaya and Johor Bahru. Head over there this school holiday and spend an amazing time with your family just like me! More information about the activities and promotions, kindly visit the below sites”