If you’re fans of KFC and Pizza Hut, you’re in for a huge surprise. Beginning this August, Coca-Cola Malaysia and QSR Brands (M) Holding Bhd-franchise owner and operator of KFC & Pizza Hut, announced a multi-year partnership in Malaysia. They three biggest names in the beverage and fast food industries aim to serve more magical meals to every Malaysia in more than 740 KFC stores and over 400 Pizza Hut restaurants across the country.

We can now enjoy our favourite KFC or Pizza Hut meals with Coca-Cola Rasa Asli, Coca-Cola Zero Sugar, Sprite, Fanta as well as Heaven and Earth teas. It’s available in fountain dispensers as well ready-to-drink cans and bottles. By September, all 1180+ KFC and Pizza Hut restaurants nationwide are projected to fully transition to serving Coca-Cola products. 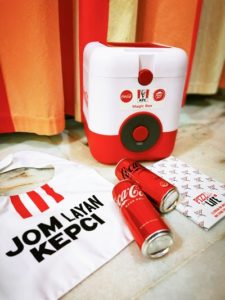 With this partnership, Coca-Cola strengthens its legacy and presence in the food and beverage industry, where its refreshing beverages are being offered at all KFC and Pizza Hut restaurants nationwide.

Really loved the idea of being to enjoy my family’s favourite KFC and Pizza Hut meals paired with a chill Coca-Cola Zero sugar as we’re aiming for a healthier lifestyle. Plus, we also like the taste of the Heaven and Earth teas too!