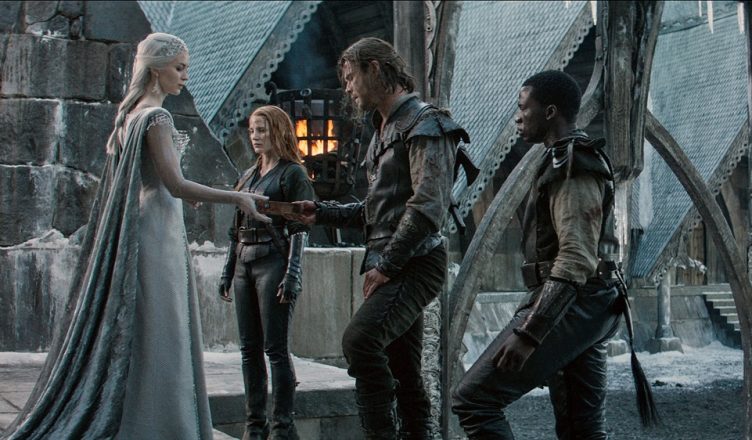 Theron stars as evil Queen Ravenna, who betrays her good sister Freya (Blunt) with an unforgivable act, freezing Freya’s heart to love and unleashing in her an icy power she never knew she possessed.  Retreating to a kingdom far to the north, Freya raises an army of Huntsmen as her protectors, with the only rule that no two of them should ever fall in love.

As a war for domination escalates between the two queens, the hero standing between them is Freya’s most elite Huntsman, Eric (Hemsworth).  Alongside fellow warrior Sara (Chastain)—the only woman who has ever captured his heart—Eric must help Freya vanquish her sister or Ravenna’s wickedness will rule for eternity. Will evil triumph over good? Will love conquers all?

Produced by Joe Roth (the man behind Maleficient and Alice in Wonderland)and directed by Cedric Nicolas-Troyan, be prepared for  breathtaking scenes and effects in this movie.

My verdict: This movie is a grand love story between Hemsworth & Chastain; where they grew up and fall in love only to be torn apart by the evil ice queen (Emily Blunt). Both of their characters are well developed allowing their love story to fully blossom. As for ice queen (Emily Blunt), I think she portrayed her part well in this movie by showing us glimpses of naivety and cruelty. As the story goes along, you’ll find that she doesn’t seem that evil.  Needless to say, evil queen (Charlie Theron) appearance was certainly memorable albeit a bit too short. Loved the dwarfs who are so comical and got me rolling in tears.

In terms of storyline, the plot was predictable with some twist here and there. However, I felt slightly disappointed as I was expecting more scenes of the evil sisters fighting against one and another. It was rather anti-climax as the fighting scene was kept really short. Saying all this, it’s still worthwhile to catch this movie as the details and effort put in creating the effects are pretty good. All I can say is this a quite an epic adventure with lots of romance.

Take a sneak peek of the trailer here: