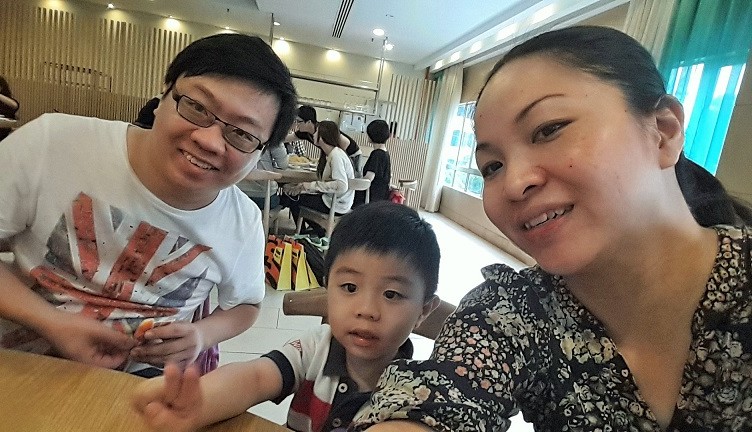 It’s been quite some time since I’ve been to Genting and I was thinking to plan a trip up. Guess GOD heard my prayers when I was invited by Genting to review First World Tower 2 Annex, Behind The Scenes Tour, Steamboat Dining at Resort Seafood and Superstars of Magic 4 show. I looked forward to this short getaway as it’s the first time my son Kenwyn will be going to Genting Highlands. I followed the bus provided by Genting to check out Behind The Scenes Tour, whilst my husband and son will arrive later to join me for steamboat dinning at Resort Seafood and Superstars of Magic 4 show.

Chilling in the bus

During the bus trip, I had a quick nap to refresh myself for the up-coming exciting activities that Genting has in-store for us. Upon arrival, we were greeted and ushered by Genting PR department to the lobby area to drop our baggage before heading into our briefing.

In the briefing room, I was introduced to other selected bloggers from Malaysia and Singapore. After introductions were made, we went thru a quick briefing showcasing Genting’s up-coming projects and events as well as program itinerary for the day. Our first activity was the Behind The Scenes Tour – A journey to explore and interact, this is a new activity introduced by Genting and it involves exploration of the hotel’s operations, DIY food workshop and Genting’s history and present projects. 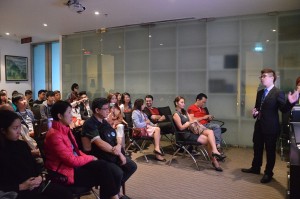 First stop was the Genting International Showroom. In here, we were introduced to the technical experts who shared their knowledge on managing the back stage, lighting and sound system during a show or event. We had a hand-on session and I realized there was a lot of work involved in making a show successful.

Closer look at the machine

Next, we were ushered into the First World Hotel’s laundry – one of the largest hotel laundry in Malaysia to experience how an iron feeder is operated and learnt to fold shirts like a pro.

After walking thru the laundry, we headed to See, Do, Eat Workshop. Children  will absolutely adored this as they can participate by creating their own bento set or doughnut masterpiece with different toppings and fillings. You can also opt to eat it on the spot or take away to nibble at later.

Last stop would be Horizon 50 the latest addition to Resorts World Genting which is conceptualized in line with Genting Integrated Tourism Plan. A venue showcasing a glimpse of the past, current and emphasize on what’s to come at the Resort. The ambience has a modern futuristic feel and is complemented by state-of-the-art technology surroundings. Some children activities were held that day included meet & greet with ‘Epic’ Adventures Mascot and art & craft corner.

Behind The Scenes Tour

By then, we were all famished and was herded to the newly revamped Resort Seafood restaurant for our dinner. We were invited to try their Steamboat Dinner prepared by Chef Lai Kok Yeow and and his kitchen team. 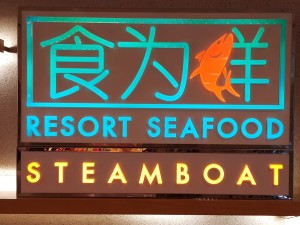 There was a variety of fresh food available such as meats, seafood, vegetables, mushrooms and lots more. On top of that, I noticed that Resort Seafood provides about 20 different sauces and we were spoilt for choice. You can opt to go for green chili sauce to burning chili oil or light soya sauce to premium oyster sauce. The soup stock has many varieties such as tom yam, kampong chicken soup, fish head stock and herbal chicken flavours. Today, we will be trying the herbal chicken flavour and it was really delicious.  My son had a few bowl of the soups and I allowed it as the soups are additive-free.

A special surprised awaited us after our dinner – Ice-cream steamboat decorated with lots of fruits like lychee, strawberry, grapes and jack fruits. Take a spoon and scoop a mouthful of it and your palate will definitely ask for more.

After a hearty meal , we’re off to Genting International Showroom to catch Superstars of Magic 4.  I’m looking forward to this as my son will be able to experience this for the first time. Superstars of Magic 4 is into its fourth year running and is touted to be Asia’s largest magic variety show. The theme for this year is ‘Magic of the East Meets West’ and showcases 6 illusionists from either the east or west. The particular highlight would be showcasing how magic has evolved with technology and the show promises to be a breath-taking spectacle.

I choose aisle seats as I was afraid that my son might cry. Initially, he didn’t want to enter as he was afraid of the dark. After few rounds of persuasion, he decided to try and really loved it. First magician to introduce himself to the crowd was none other than celebrity magician Jay Mattioli. With his sense of comedy and charm, the audience are quickly taken by him.  Acting as host of Superstars of Magic 4, he proceeded to introduce Jeff Lee. A well-known celebrity magician from Taiwan, performing with TV magic and modern music. We sat in awed as he speedily take things out of his TV.

Next to perform was One Gun from Korea, stepping onto stage in a casual T-Shirt and jeans. We were promptly stunned by his act which involved his clothing keeps changing on its own in different colour and type right before our eyes.  *Wow*

The next performer from Las Vegas was Joseph Gabriel, his act was making doves disappear at his will. During this time, my son keep saying ‘Bird, Bird’ and clap happily along to the show. Last but not least, Shawn Farquhar from Canada and his performance was changing cards with a twist of his hand.

The finale of the event came, when Jay returned on stage and shared his challenges and triumph of being a travelling magician and the joy he found during his performances which was truly touching.

As we call this a night, we trudge to our rooms to rest. I was allocated the XYZ Deluxe Room at the newly refurbished First World Hotel, Tower 2 Annex. Walking towards the hotel lobby, I noticed the beautifully designer featured wall on my right. As we go further along, we came upon the signature Terminal 2 Café which is still bustling with people purchasing pastries or drinks for supper.

The first thing I noticed in my room was the separate shower and toilet cubicle. That’s very good as I don’t need to rush my husband out of toilet (he takes ages in it). Another thing that caught my eye was the lively and vibrant colours used in the room, giving it a chic look and yet creating a comfortable atmosphere. The room comes equipped with flat screen TV, open hanging cupboard, mini fridge, large room safe and refreshments with tea and coffee-making facilities.

Although there were some misses, the rooms are very much better compared to the previous ones. On a happy note, we were informed that WIFI will be available in the near future. (Note: Below pictures are provided by Rane)

Thank you to Genting for offering me an opportunity to check out the newly refurbished First World Tower 2 Annex, steamboat dining at Resort Seafood, Behind The Scenes Tour and Superstars of Magic 4 show. I had an enjoyable trip with my family and look forward to the opening of the outdoor theme park -Twentieth Century Fox in Nov/Dec 2016. , the first of its kind in Asia. Till then, I’ll keep you posted on my next travel getaway. If you need further information, do refer to www.rwgenting.com